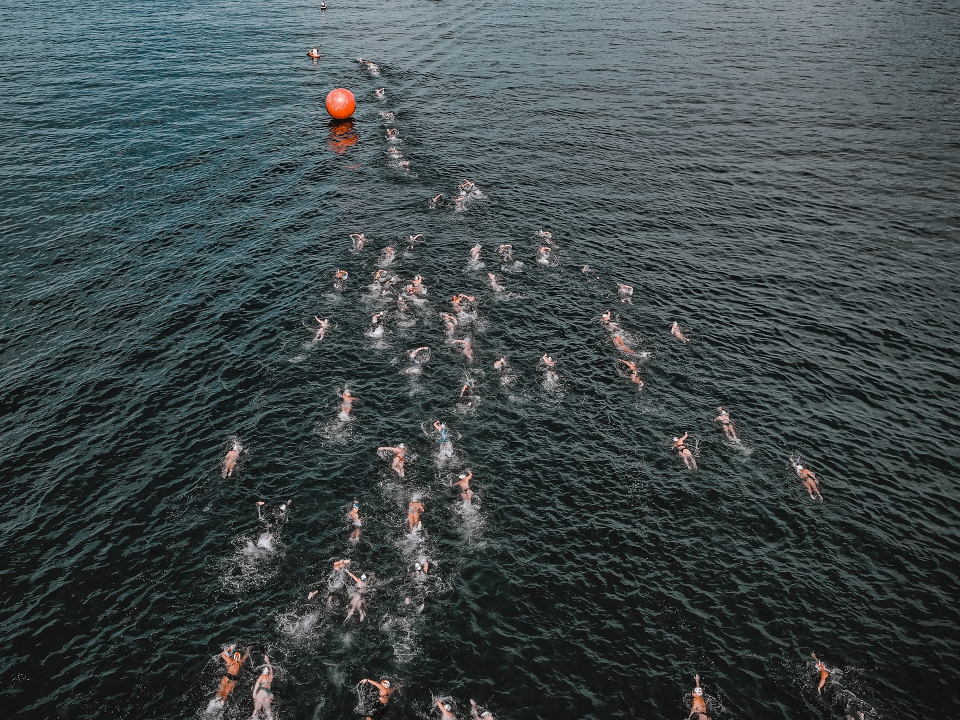 Assume that we have two closed boxes filled with the same type of particles, each with numbers

, as shown in Figure 1. Each box, in isolation, is in equilibrium. When we open the valve between the two boxes, will particles flow?

will not change with respect to either

, meaning that there will no particle flow (note that

). This equilibrium indicator can be written as (at fixed volumes

This indicator represents the distance from equilibrium. We can think of it as a sort of restoring force. From the relation

is chemical potential and

is temperature, we can express this driving force

. Generalizing to a continuous system,

indicates that the driving force is for particle flow. This term is one kind of a generalized driving force, or affinity, which drives the system back to equilibrium through a change of an extensive variable (i.e. flux).

The driving force for the flux of other extensive variables can be derived similarly. For energy flux (which is one of the many ways of defining heat flux), it is:

For volume flux, it is:

Also note that the intensive variable of the entire system consisting of two boxes is not properly defined because the two boxes are not in equilibrium. For example,

, so we cannot define

of the entire system. However, each box is in local equilibrium, which is why we can specify variables such as

. When generalized to a continuous system, by analogy, each local coordinate of the system can be considered to be in local equilibrium. This local equilibrium description is the reason why we can talk about temperatures and chemical potentials in certain non-equilibrium cases. This treatment will be justified from investigating stationary states, but until then, we can think of it as an assumption.

factor which was the driving force in the two-box system, derived in Eq. (1). Then, the rate

is the process that converts the driving force to an entropy production rate. Now, we would like to generalize to a continuous system. Recall that the difference in intensive properties between two boxes was converted to a gradient in Eq. (2) (i.e. dimensions were normalized by length), yielding a driving force

for a continuous system. Similarly, we normalize the flux term

as the particle flux per area. Then, the entropy production rate in a continuous system becomes:

where the entropy term was replaced with volumetric entropy

. This entropy now represents that of a local coordinate (again, the local equilibrium treatment).

We have arrived at an important relation worth remembering: the product of generalized force and flux equals the local entropy production rate. We have derived it for particle flux and its driving force here, but in general it can be applied analogously for other fluxes such as heat. A non-zero entropy production rate is, by definition, an irreversible process. We have just found why the rate of these irreversible processes are understood by decomposing them into forces and fluxes.

Many linear flux and force relations are known empirically. Examples are Ohm’s law for electrical conduction, Fick’s law for diffusion, Fourier’s law for heat conduction, and so on. Here, we will explore the thermodynamic implications of these linear relations.

Just like how an equilibrium thermodynamic state only depends on state variables, but not on the process of how that state is reached, we can analogously define a “memoryless” regime where the local flux depends only on the local intensive variables and driving forces (affinities). Then, we can Taylor expand the generalized flux in terms of affinities, with coefficients that only depend on local intensive variables. Doing this for the particle flux and its corresponding affinity,

Note that the zeroth-order term is zero since no flux occurs at zero affinity, and the first-order term is the linear flux-force relation,

It is seen that a linear relation between flux and force is equivalent to saying that the entropy production rate is sufficiently described with only the lowest order term,

. For example, Fick’s law for diffusion,

is valid when the driving force for particle flux,

, particularly originates from a concentration gradient

(which we derived in another post). Ohm’s law is valid when

originates from a chemical potential gradient of electrons. These two seemingly unrelated laws correspond to the same general driving force. Therefore, we can anticipate that there must be a relation between

(diffusivity) and electrical conductivity (which is the Nernst-Einstein relation, derived here).

One of the concepts we encounter from studying linear transport equations is that of “steady state,” or “stationary state.” For example, when two boundaries of an object are fixed at different temperatures, we expect the system to eventually reach a stationary temperature profile that doesn’t change in time. The system cannot reach equilibrium because of the boundary condition that is not uniform, but the next close thing to equilibrium is a stationary state. Using the above concept of linear flux-force and entropy production rate, it can be mathematically proved that a stationary state is indeed a state of minimum entropy production (proof in Footnote 1). It can also be shown that this stationary state is a stable state against perturbations, similar to how a thermodynamic equilibrium state is stable. This regime is sometimes termed “near-equilibrium,” to emphasize that it is a special kind of non-equilibrium. Overall, these are some of the reasons why the theoretically ideal condition for measuring transport properties is under steady state and with small gradients (which, unfortunately, often conflicts with practical requirements).

Linear transport, but not so linear chemical reactions

You might wonder how to tell whether an irreversible process follows a linear flux-force relation or not. The answer to this question must be found empirically. The linear laws such as Fourier’s law or Ohm’s law are testimony to the surprisingly wide applicability of the linear flux-force relations. Even when apparent non-linearity is observed, it is often due to the transport coefficient

being dependent on the intensive variables (e.g. heat conductivity dependent on temperature), rather from higher-order terms in the flux-force relation.

You might encounter different definitions of general forces and fluxes in the non-equilibrium thermodynamics literature. For example, instead of

. The difference originates from defining fluxes differently, particularly the heat flux. These different definitions still define the same physical process (for example, thermal conductivity values will not change), but the thermodynamic descriptions become different. In this post, we derived the form that is easiest to understand, but in the application, it is more convenient to have forms like

where temperature gradients are separated from the chemical potential gradient. Details on this re-formulation will be a future post.

For simplicity, we have looked at different driving force-flux pairs individually. But, some of the really useful understandings come to fruition when we consider multiple driving forces acting simultaneously. For example, the particle flux

can be driven not only by

(i.e. a temperature gradient). Then time-reversal symmetry tells us these cross-coefficients between different driving forces are not independent (this is the famous Onsager reciprocity). I’ll maybe write a post about this in the future, so stay tuned!

Bonus: What does the steady-state concentration profile look like?

Here is a fun exercise that might feel like a paradox. Let’s say we have a bar with some dilute isotopes diffusing along the length. At one end, the isotope concentration is fixed at A (for example, through equilibration with an isotope-enriched air), and at the other end it is fixed at a different concentration B. What is the steady-state concentration profile?

In one approach, we might use Fick’s law for diffusion

should be linear along the length, as in the left panel of Figure 2. In another approach, we might use the general force-flux relation

. To make a fair comparison with the first approach, let’s say

is the gas constant. Then,

should be linear along the length, as in the right panel of Figure 2.

Why are these contradictory? Did you find the trick? If you’re looking for a hint, find the relation between

from this post. If you find the answer, you will understand that neither is guaranteed to be correct (although in real cases,

will likely be less sensitive to

Generalized driving force (affinity) is a measure of how far from equilibrium a system is, in terms of intensive variables. Generalized flux is the time evolution of extensive variables, driven by the generalized driving forces. This flux is the physical transport process by which the system approaches equilibrium, or in other words, produces entropy. The product of a generalized flux and its corresponding force is the volumetric entropy production rate produced by that process. Linear flux-force relations represent near-equilibrium, producing stable stationary states with a minimum entropy production rate. Transport is often linear in practical regimes, with the exception of chemical reactions.

Assume a generic case of

(which could, for example, be

. Our goal is to investigate the profile of

when the entropy production rate is minimum, and see if that corresponds to a stationary state. Suppose that there is a solid of volume

with some fixed values of

at the boundaries (e.g. 1D bar with each end at different temperatures). The entropy production rate from this solid is the following volume integral:

such that the integral in Eq. (10) is at a minimum value. This variational problem can be solved by applying the Euler–Lagrange equation, which yields the condition:

Here we assumed that

is not dependent on

(if you read the bonus section, you might find this assumption interesting). Now, we can rewrite this condition in terms of flux:

The divergence of a flux represents the temporal change at a local coordinate. For example, for particle flux,