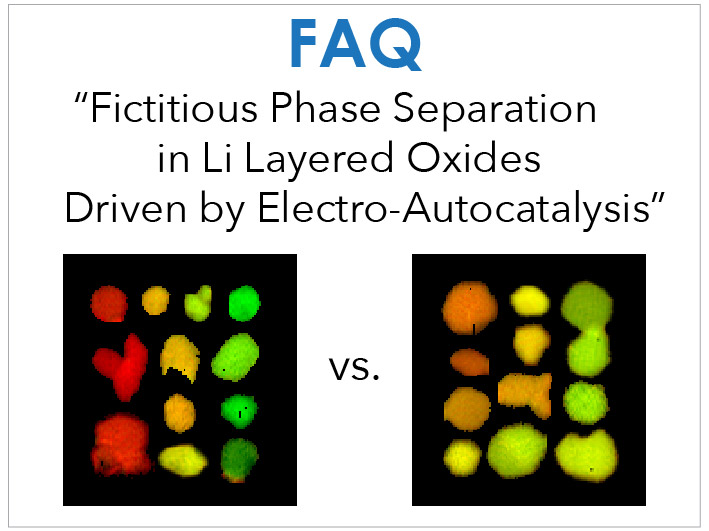 We ended up packing quite a lot of information in our recent electro-autocatalysis paper. The scope of the paper grew significantly over the peer-review process, including lots of information that were originally planned as a follow-up publication. We even added an FAQ section at the end of Supplementary Information, which covers some recurring questions brought up by the reviewers. Now, from giving talks and sharing the manuscript with collaborators, I have accumulated even more frequently-asked questions. So, here is an expansion of the FAQ for our paper. I hope this FAQ helps navigate the information given in our paper.

Why do some of the charging curves show an “overshooting” behavior at low SOC?

Isn’t this overshooting a first-cycle forming effect? The cycling curves in Fig. 1 (data is from our paper) show this overshooting voltage curve near Li fraction of 1.0, especially pronounced at higher rates. Some people have reported this behavior during the first charging cycle, but the cycling curves in Fig. 1 are from later cycles. Unlike conventional cycles that only lithiate to about Li fraction 0.9 or less, we are lithiating to Li fraction 1.0 through a long voltage hold at 2 or 2.5 V. This process makes the later cycles look like first-cycle curves. It also tells us that this overshooting behavior is not from an irreversible forming process, but rather a behavior intrinsic to the kinetics of the system.

Then what is causing this overshooting? We believe it is a feature that can appear from a strong autocatalytic interface-limited reaction. As we demonstrate in the simulation part of our paper, this overshooting can be explained (i.e. reproduced in simulation) even without introducing additional mechanisms. For example, nucleation overpotentials have been suggested as a cause of this behavior, but just a limiting interface with autocatalytic kinetics (steep increase in exchange current upon delithiation) reproduces this feature without any nucleation barriers.

Supplementary Video 1 of our paper (available on Youtube) provides some good visual insight into this phenomenon. During the first couple of seconds of charging (reaction-limited case on the left panel), the voltage overshoots until a few particles start to turn green. Once there are partially delithiated particles, those particles can support the imposed current without causing as much reaction overpotentials. The cell voltage thereby decreases. Therefore, the overshooting is associated with the early-stage reaction overpotentials when delithiating from a fully lithiated state.

Although this mechanism might seem similar to a nucleation barrier, the origin is completely different (reaction overpotential is not from the surface energy of a newly created interface). Also, note that such overshooting does not happen in the diffusion-limited case (right panel of the simulation video). The overshooting is thus another indication of reaction-limitation.

Why is the “overshooting” behavior more pronounced in certain cases?

The overshooting is a product of the “fastness” of the current-driven reaction. It is thus most pronounced when the driven-reaction rate is fast relative to the kinetic capability of the active material. Fully lithiated compositions are where the surface reaction rate is lowest. Also, platelet particles have a lower surface area of the non-basal plane (considered the facet with facile kinetics).

Is the “overshooting” behavior a necessary condition for fictitious phase separation?

How does coulombic inefficiency contribute to composition control in this study?

The biggest challenge associated with coulombic inefficiency is during full lithiation, where a very long voltage hold is required. The current level can become quite low (on the order of few tens of nA) over a few days, and the measurement of this fluctuating current could be inaccurate. Fortunately, we have discovered that the long voltage hold does revert the composition to near full-lithiation (confirmed with XRD). Therefore, we believe that the apparent coulombic inefficiency seen in some cycling curves (like the curves from platelets shown in Fig. 1) is from the inaccuracy of current measurements (or from parasitic currents). In data obtained later from different compositions (e.g. see Fig. S7 of paper), we have improved the current measurement; we were able to maintain the voltage hold more consistently until the charge-counted composition reached full lithiation. Overall, we believe that diffraction is a better means for measuring the Li composition near full lithiation, rather than charge counting.

Why can diffusion-limitation not explain the inter-particle inhomogeneity in composition?

I encourage you to read my other post with a more detailed explanation about diffusion- vs. reaction-limitation.